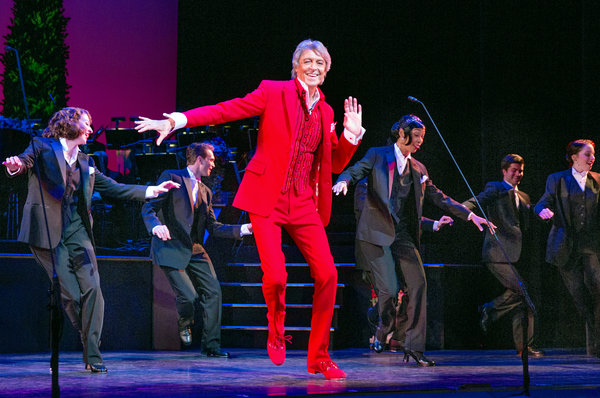 Sporting a sleek fire-engine red suit, Tommy Tune appears suddenly, like an exotic bird just flown in from the tropics to brighten our frigid winter, in “Lady, Be Good!,” the George and Ira Gershwin musical that’s the first production of the City Center Encores! season.

A musical theater veteran with nine Tony awards to his name, Mr. Tune has been absent from New York theater stages for at least a decade. Amazingly trim and towering at 75, he still has the radiance of a performer who gathers warmth from the spotlight. And spreads it, too. Although he’s no longer the bravura tap dancer of his prime, when those long limbs spring into motion in the jaunty “Fascinating Rhythm,” he remains a wonder to watch. Music ripples through his body as naturally as a breeze stirring leaves on a tree, and you suddenly feel airborne yourself.

That magical feeling comes rarely in this likable but only intermittently effervescent revival of the 1924 musical, which was the first big Broadway hit for the Gershwins and added luster to the careers of its stars, Fred and Adele Astaire. It dates from a startlingly fertile period for George Gershwin, who composed and began performing “Rhapsody in Blue” earlier that year and opened another musical in London, “Primrose,” just a few months before “Lady, Be Good!” burst into view. 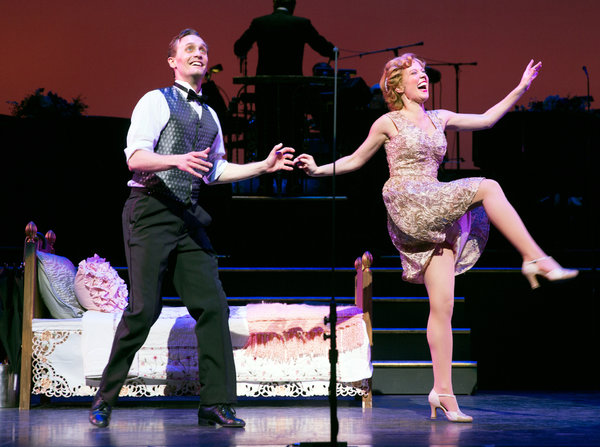 Despite its success, the musical has never been revived on Broadway, in contrast to some other early Gershwin shows, like “Oh, Kay!” (and after a fashion, “Funny Face,” which was retooled by Mr. Tune as a starring vehicle, “My One and Only”). No need to peer very deep to plumb the mystery of “Lady’s” vanishing. Its percolating score has plenty of throwaway charm, and a small handful of gems (alas, the classic “The Man I Love” was cut during out-of-town tryouts). But, as with many Gershwin musicals, the book, by the writers Guy Bolton and Fred Thompson, is a featherweight farrago of romantic contrivances that wears out its daffy appeal long before the curtain falls to the sound of wedding bells — well, a wedding-themed reprise of “Fascinating Rhythm,” anyway.

There’s also the fact that the show was a vehicle built to suit the talents of the Astaires, as the down-on-their-luck brother and sister Dick and Susie Trevor. (Adele actually got the better notices.) Danny Gardner and Patti Murin, who play them here, give perky, amiable performances that suit the show’s wisecracking tone, but they cannot always elevate the material in the way that Mr. Tune, with his natural authority and audience-embracing warmth, does so effortlessly.

With not a dime to their names, Dick and Susie contrive various preposterous schemes to secure their futures. After pledging to buck each other up in the peppy duet “Hang on to Me,” they skedaddle to the garden party hosted by the fabulously wealthy Josephine Vanderwater (Jennifer Laura Thompson, in fine comic form), whom Dick decides he’ll propose to, to Susie’s outrage. He really loves the penniless Shirley Vernon (a bright but rarely onstage Erin Mackey), as Susie knows, and she’s determined to foil his plan.

Also coming to the kids’ assistance is J. Watterson Watkins (Douglas Sills), “the smartest corrupt lawyer in town,” who hatches his own inane subplot involving persuading Susie to impersonate a Mexican widow so he can get his hands on the fortune she’s been left. Mr. Sills, hamming it up jovially throughout, sings the show’s title song, “Oh, Lady Be Good!,” as a plea for Susie to climb aboard his harebrained scheme. She does, naturally, because she wants a cut for herself to save Dick from that mercenary marriage, but also because a harebrained scheme is just what the doctor ordered for the plot to move forward.

Did I mention that the actual possessor of that Mexican fortune is very much alive, disguised as a hobo named Jack Robinson? And that he and Susie fall for each other at first sight, or at least first song? Oy, never mind. (Although as that fake hobo, Colin Donnell is quite winning.)

Among the more memorable musical passages are a duet for Dick and Shirley, “The Half of It, Dearie, Blues,” a song that’s retained its stature through the years; and “Little Jazz Bird,” Mr. Tune’s second-act song, this time performed in neon blue and introduced with winking nonchalance by Mr. Tune: “This is where I do my specialty.” Among the less-than-immortal interludes are that Susie-as-a-hot-tamale number, “Señorita Juanita,” and an equally bizarre ethnic-themed duet for Dick and Susie called “Swiss Miss,” replete with references to the Alps, cheese, watches and yodeling.

As I said, never mind. Despite its consistent inconsequentiality, the production moves along fairly briskly under the direction of Mark Brokaw, with generous dance sequences choreographed by Randy Skinner. The orchestra, conducted by Rob Fisher, the former music director of the Encores! series, gives a sprightly rendition of the score, which combines the jazzy buoyancy of the signature Gershwin scores with some of the more conventional operetta-like choral numbers that were soon to become outmoded as more contemporary sounds fertilized Broadway.

Although their material is thin — with song titles like “Wonderful Party” and “Linger in the Lobby” — the fine chorus makes a notable contribution to the evening, as do the two pianists in the orchestra, Chris Fenwick and Greg Anthony, who share a delightful specialty number in the first act.

The connection of Mr. Tune’s character to the rest of the gang, incidentally, remains almost wholly obscure. He’s called “the professor” in the program but seems to be an itinerant entertainer (with a flair for bright colors) named Jeff White, according to the script. And he presides in some vaguely ceremonial way over the festivities celebrating the four weddings in the offing at the finale. A finale for four happy couples seems a bit much even for a light musical comedy, but at least it means everyone has a dancing partner.

Everyone except Mr. Tune, that is, and he definitely doesn’t need one.