One dance icon steps in for another at Café Carlyle.
Zachary Stewart • Off-Broadway • Jan 13, 2016 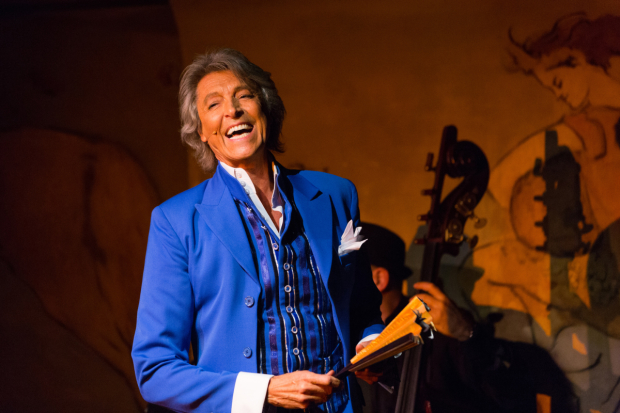 “I’m pinch-hitting for Chita,” Tommy Tune announces several songs into his set at Café Carlyle. Chita Rivera had originally been scheduled to make her Carlyle debut this month, but sustained a pelvic stress fracture over the holidays. Fear not: She’s slated to return in April. Few performers could fill such mythic jazz shoes. Luckily, the equally legendary Tommy Tune was available to perform his cabaret act, Tommy Tune, Tonight! Holding a paper fan and wearing the immaculately tailored blue suit he wore in the Encores! presentation of Lady, Be Good, Tommy Tune takes the Carlyle stage singing Cole Porter’s “Too Darn Hot” from Kiss Me, Kate.

By “stage,” I really mean a small platform, no bigger than two feet by four feet. It looks like a big cutting board and it takes the place of the regular bandstand (almost certainly too raised for a performer of Tune’s stature). “It’s the world’s tiniest tap stage,” Tune observes, pointing to the floor. The Carlyle is not a venue known for showcasing dance. Then again, Tune is not known for his soaring vocals. On this evening, Tune only ever musters a gussied-up sprechstimme: He speak-sings on pitch, stays within a comfortable octave, and never goes for the glory note. Oh, but what magnificent expression he manages in his limited range. Tune brings genuine emotion and vibrant coloring to lyrics that are too often buried by vocal pyrotechnics. He supplements that with physicality and dance. It is a rare treat to see such a skilled performer tap in the intimate confines of Café Carlyle.

A natural choreographer, Tune uses every inch of the space afforded him. He wows us with his fancy footwork during the Gershwins’ “Fascinating Rhythm.” He adds a Brazilian flair to his steps in Marcos Valle and Normal Gimbel’s “Summer Samba.” His 6-foot-6 frame ascends a ladder placed in front of the drum set for Carole King and Gerry Goffin’s “Up on the Roof,” his head nearly touching the ceiling. Tune combines highly refined dance skills with a shrewd sense of levels and space, utilizing the Carlyle in ways I have never seen.

He’s quick to admit that he’s not always been such a polished performer: He had a lot of mentors. He dedicates a heartfelt rendition of “Very Soft Shoes” from Once Upon a Mattress to Charles “Honi” Coles, a man who seems to have been a father figure in Tune’s extended dance family. You can hear the respect and admiration in his voice as he sings. He also performs Coles’ original choreography for “Sand in My Shoes” with utter sophistication.

Tune shares what seems like a wealth (but it’s certainly only a tiny fraction) of the anecdotes he has accumulated over half a century in show business. He discusses his early years on Broadway, occasionally lapsing into a pronounced Texas twang. Proudly, he recites the first words his idol, Fred Astaire, said to him during a backstage encounter: “You are a tall son of a bitch.” It makes for a charming evening of cabaret, verging on an autobiographical solo show.

Amid such a narrative-driven cabaret, some real-life drama coincidentally emerged on opening night: Seated at the front table, the Countess LuAnn (of Real Housewives fame) repeatedly tried to insert herself into the show, at one point jumping up and kissing Tune wildly (one hopes that theater etiquette is not a subject she covers in Class with the Countess

). A real class act, Tune breezed past it all with a “been there, done that” ease. “Old man trouble, I don’t mind him,” he sang, side-eyeing the dubious aristocrat during the Gershwins’ “I Got Rhythm.” Ever-unflappable, there can be no doubt that this man has earned all 10 of his Tony awards.

It also helps that he has surrounded himself with very creative musicians. Musical director Michael Biagi constantly impresses with his Wagnerian approach to jazz. He weaves motifs from Gershwin’s “Rhapsody in Blue” throughout the evening in surprising and delightful ways. Other recognizable themes (“One” from ”A Chorus Line”, “New York, New York”) pop in and out of Biagi’s endlessly clever arrangements. It ties Tune’s eclectic set list into a narrative about a Texas kid moving to New York and making it big on Broadway.

Few Broadway stars have made it bigger than Tommy Tune, so if this show feels like a victory lap, it is well-earned. At one point in the show he ponders aloud about his 2015 Lifetime Achievement Tony Award, “Were they trying to tell me something?” Yes: Keep doing what you’re doing.